The assassination of objectivity and humanity by the coward Paul Krugman

I have just read with dismay a post by the coward Paul Krugman in which he uses his privileged space in the NYT to spew a bilious pamphlet, full of hatred, which tarnishes the 9/11 memory with partisan bullshit (pardon my French).

After trying unsuccessfully to reply to his BS (he has blocked comments), and from this spanish-speaking blog of which I am a tiny part, I just wanted to say that my thoughts are with you in this sad commemoration, and that we know that most sane and rational people don't think like this useless, pathetic excuse of an "economist".

He has all the right in the world to post his coward bullshit in his own blog and close it to comments - after all, he lives in a free country (thanks at least in part to the heroes he so glibly despises). But I have the right to call him a liar, a hypocrit and a piece of shit in the one I have been so generously asked to participate.

Be strong. The rest of the world has always looked, and will keep looking, at you in awe. 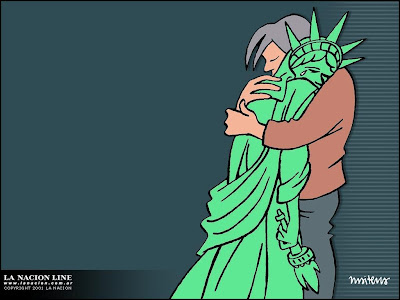 Email ThisBlogThis!Share to TwitterShare to FacebookShare to Pinterest
Tags: by Massa, Economy, HdrmP, Posts in Spanish, US of A